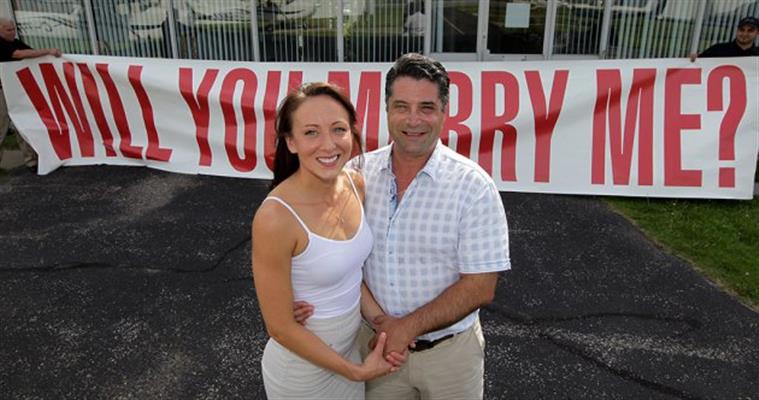 Marco D’Antonio couldn’t find a plane to carry his matrimonial message across the sky so he got his fearful flyer of a girlfriend up in the air for one over-the-top marriage proposal.

It took two months, two test flights and a lengthy Saturday morning drive past Belle River to position his 45-foot long “Ashley Will You Marry Me? Marco” sign on the ground on a farmer’s grass airstrip to pop the question. But oh did it pop.

Ashley Crow was so surprised and excited looking down on the sign 500 feet below, she didn’t notice her boyfriend holding out an engagement ring beside her in the plane.

“Instantly I was shaking. It’s like cloud nine right away. It’s like an adrenalin rush,” Crow said Wednesday.

At first she thought it was odd that the pilot on their scenic tour over Windsor-Essex was pointing out a van and a sign on the ground. The fitness instructor is still stunned by the soaring proposal.

“Most women have this idea in their heads when they’re little girls, they fantasize about what their wedding day is going to be like and how their guy is going to propose to them. I never had that,” she said. “I just can’t believe it happened to me. It’s like a fairytale the way he did it.”

It almost didn’t go so well. The first time D’Antonio, a Valente Real Estate agent, stretched out the banner on the ground near the airport but the plane couldn’t fly low enough. His four-foot-high letters on a banner looked like a tiny business card. “It would have been a disaster.”

The second time he got permission from a farmer to use an air strip so the Cessna 172 could fly lower. The third time he was finally ready to invite his girlfriend saying he had a free plane ride. He held her hand when she was a bit anxious to be in a small plane and later she didn’t seem to mind flying.

She did eventually say yes. “I’m holding the ring. She didn’t even grab it. She just kept shaking and saying ‘I can’t believe this,’” D’Antonio said.

Love is in the air at the Windsor Flying Club.

Pilot Brandon Beneteau said the club has been involved in three marriage proposals this year, but D’Antonio’s is the first elaborate one with a sign on the ground. The other proposals were made during or after a flight.

Beneteau pretended not to know D’Antonio, flew low when he got to the grass airstrip and asked Crow to read the sign below. “It was pretty funny because you can hear the voices through the headsets and the microphone and it was just like a ball of tears after, of joy,” he said. “He’s like ‘Brandon, I think she said yes.’”

A one-hour scenic flight with the Windsor Flying Club costs almost $225 and you don’t have to propose to book one. Beneteau said it’s a good feeling for the club to be a part of somebody’s big moment.

“It’s a little different and creative instead of just the regular dinner and a movie, I guess.”

D’Antonio knew his low-key girlfriend wasn’t the type for a sports field Jumbotron proposal but he wanted something special. They’ve been dating almost three years and haven’t set a wedding date.

He’s getting grief from other men who say he’s making them look bad. “It’s got to be a memorable occasion, right?”