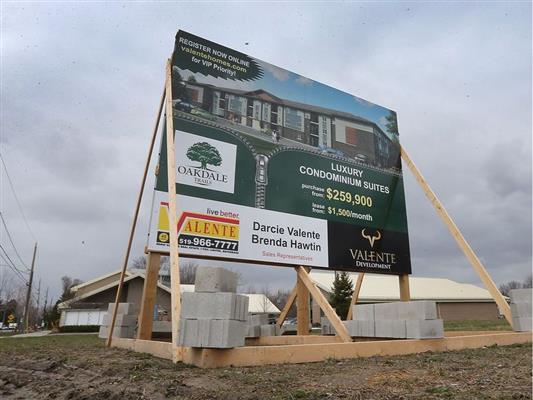 “As soon as the town put that incentive out to developers and saying that they were waiving these kinds of fees for these kinds of developments, I specifically went through the entire town looking for a site to build a project like this,” developer Peter Valente said.

Exempting development charges for multi-family dwellings in the core area of LaSalle has had the desired result, attracting several condominium projects in 2017.

Larry Silani, the town’s director of development and strategic initiatives, said the waiver drew a large, 131-unit condominium development as well as a couple of smaller projects with 10 or 12 units in total. Overall, housing construction in LaSalle slowed slightly in 2017.

“When it comes to singles, semis and townhouses, we’ve been very successful in having that form of housing built in LaSalle without having any incentives being necessary,” Silani said. “When it came to multi-family residential there wasn’t a lot of building activity and similiarly with commercial development.

“We felt that that was an area that could benefit from some targeted incentive. And we believe in both cases it has been successful.”

He couldn’t predict at this point what 2018 will bring.

“As soon as the town put that incentive out to developers and saying that they were waiving these kinds of fees for these kinds of developments, I specifically went through the entire town looking for a site to build a project like this,” Valente said.

Currently, services are being installed at the site in preparation for construction to begin.

Valente said he has pre-sold 25 units and hit the “threshold” needed to begin construction on a 26-unit rental building and a 38-unit condominium.

The third and largest building with 67 units for sale will launch in the next couple of weeks.

Valente will save approximately $10,000 per unit on development charges for a total of $1.3 million in savings.

“(Condominiums) are very sensitive to value,” Valente said, suggesting the break on development fees gets passed on to consumers. He said a lot of first-home buyers purchase condos as a way to get into the market, as well as folks looking for a retirement home.

“It’s a condo so it generally has to be cheaper in order to sell,” he said. “When somebody gives you an opportunity to save $10,000 … and we can pass those savings along to the buyers in the end, you know, I thought that was a very good incentive.”

Mayor Ken Antaya said the cost to the town is recouped through taxation, which is higher on condos than houses, and the higher-density housing, something that people have been seeking in LaSalle, attracts more businesses and restaurants to the area.

“It’s like losing a little bit of short-term money for long-term gain,” Antaya said. “You can generate revenue over a longer period as opposed to the development charges.

Antaya himself is a condo convert.

In 2001, he sold his house, which had become too big for he and his daughter who was living with him at the time. As a stopgap measure, he rented a condo unit for a few months.

And soon he was sold on owning his own unit.

“I became interested in the lifestyle and eventually bought one and I’ve been in there ever since,” Antaya said. “They sell carefree living, right. You lock the door behind you and move on.”

Silani said he can’t say for certain whether the condominiums would have gone ahead without the incentive but “certainly from our point of view, this was something targeted in such a manner that it was an area of development that was not taking place on a regular basis so it warranted some form of incentive to assist and spur on that type of activity.”

Administration had no specific number of units or buildings that they were trying to attract, Silani said. They just knew that this was “an area that was important to the community and we wanted to see if there was interest.

“We wanted to test the waters and see whether this targeted (incentive would work).”